Days after video of two police officers flogging a mother of two in Iwo went viral, the two officers have been dismissed from the service of the Nigeria Police Force.

GIDIBASE had earlier reported that video of policemen mercilessly flogging a mother of two identified as Tola Azeez for violating the coronavirus lockdown in Osun state.

The police officers were identified as Inspector Ikuesan Taiwo with AP NO 251724 and PC Abass Ibrahim with Force No. 509634.

Recall that the victim identified as Tola Azeez stepped out of her house during the lockdown to reportedly buy some drugs for a sick person when she was accosted by the officers who flooged her with a cane and only stopped after their colleagues intervened.

Hours after the incident, the Inspector General of Police, Adamu Mohammed called for a full investigation after seeing the video.

The investigations have been concluded and the police officers have been dismissed. They would be arraigned in court soon. 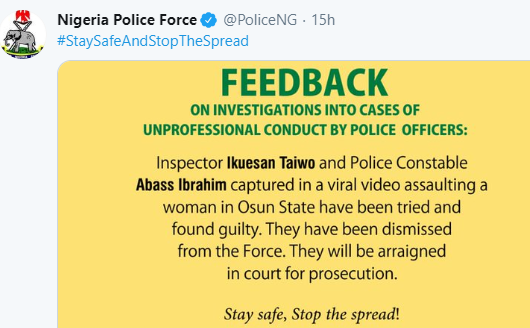