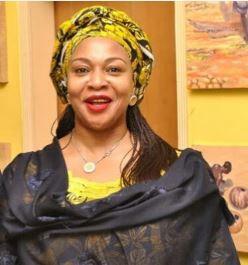 The Senate President Bukola Saraki’s sister, Gbemi Saraki has been captured in a video campaigning for President Muhammadu Buhari.

The Senate President is the Campaign Director General of the PDP Presidential candidate, Atiku Abubakar and it came as a shock to many to see his sister campaigning for the ruling All Progressive Congress.

If you recall, a video had also surfaced on the internet some few days back where the Senate was seen asking a crowd to vote for President Buhari.

He later claimed the video was doctored and he would never campaign for the President while he is the DG of the Atiku Campaign organisation.

Gbemi Saraki on a #PMB4Plus4 level.

(Semblance between her and SP @bukolasaraki is really striking in this video). pic.twitter.com/zDVSeV3ajG