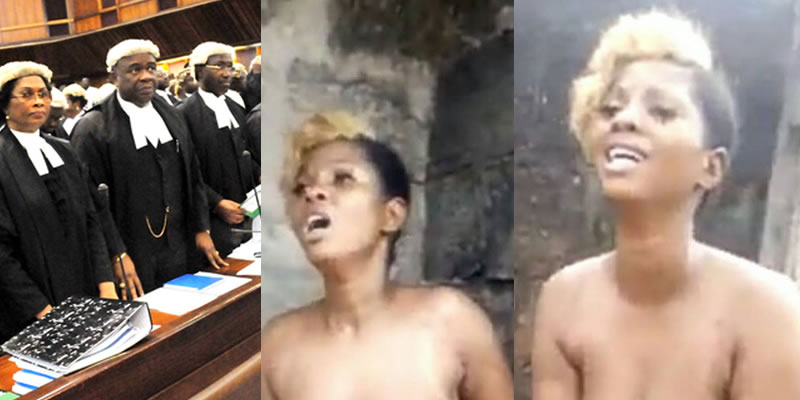 A video of an unidentified slay queen stripped and tortured over an alleged phone theft in Benin City went viral some few days back.

In the video, the lady was heard crying and denying stealing any phone, while she was being humiliated by the crowd who refused to show her mercy.

A group of people inserted pepper into her private parts for allegedly stealing a mobile phone in Benin City and the incidence has since caused outrage on social media.

The League of Patriotic Lawyers has joined other groups who are seeking justice for the said lady. They have given Edo State Commissioner of Police, Mr. Olusegun Odumosu, 24 hours to unravel those behind the torture and insertion of pepper into the lady’s private part.

Chairman of the platform and former Student Union President of the University of Benin, Mr. Abubakar Yesufu, urged the state Director, Department of State Services, DSS, to be involved in the investigation.

In a statement on Tuesday, Yesufu said: “The League of Patriotic Lawyers has given the Edo State Commissioner of Police 24 hours to arrest and commence prosecution of all the street urchins behind this barbaric, inhuman, wicked, ungodly and unacceptable act, whose video has gone viral on the social media.

“Failure to unravel the perpetrators would lead to serious legal consequences against the various security agencies, especially the Police and Director of DSS in the state. This ungodly act shows that law and order have broken down in Benin. “We call on the governor, who is undoubtedly unaware of this devilish act, and the Secretary to the State Government, a very hard working and God-fearing man, to ensure that the perpetrators are tracked and punished accordingly.”

“We are not concerned about the merit of this case at this moment, but the exhibition of extreme cruelty which is completely alien to our revered culture and tradition.’’