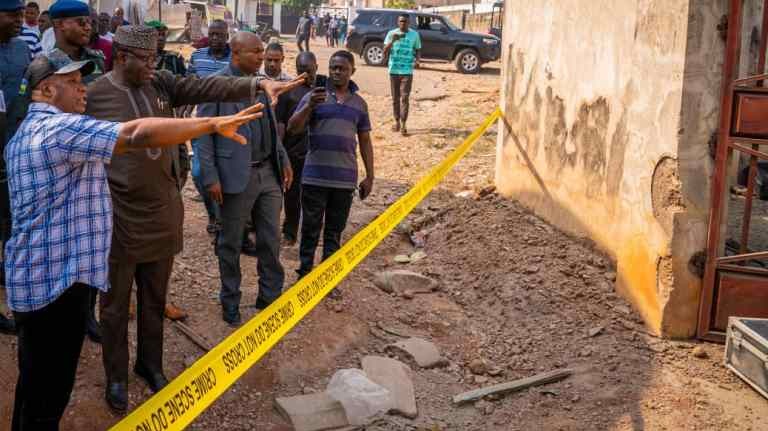 There was palpable fear in Ado-Ekiti on Saturday, as a loud bang suspected to be bomb explosion rocked Ekiti state old government Secretariat.

It was gathered that the explosion, which occurred around 7.05 am, ripped some of the buildings at the old government secretariat located at the Oke-Oriomi area of Ado-Ekiti, where the Ministry of Local Government and Chieftaincy and some other agencies and departments were located.

Other buildings located over two kilometres away from the scene of the incident were also affected, as the explosion reverberated around the city of Ado-Ekiti, especially at Okesa, Okeyinmi, Irona and Ilawe road, making the people living in those areas to scamper for safety.

It was gathered that the explosion occurred at the Ordinance Explosive Disposal Department (EoD) of the Ekiti police command.

The bungalow housing the EoD office was ripped apart, while the adjoining offices that housed the office of the Nigerian Union of journalists, Correspondents’ chapel, Ekiti chapter was badly affected.

All the offices around the area were affected, louvre blades and glasses shattered to pieces while the asbestos and Polyvinyl Chloride (PVC) ceiling, doors and windscreen of vehicles parked around the offices were shredded into pieces.

The police Commissioner, Mr Asuquo Amba and officers of the anti-bomb squad arrived the scene shortly after the explosion and immediately swung into action by removing some of the explosive materials in the area.

Fayemi, however, said the EoD office shouldn’t have been located in the area, saying: “it ought to be in a far distance.

The CP while addressing newsmen at the site of the bomb blast added that he suspected that the explosion was caused by counter-terrorism accessories kept in the office.

According to him, ” Let my men from anti bomb department check around. Officers of the anti bomb are combing the place as you can see.

“This is the office where they keep detonation accessories. The explosion must have been caused by equipment kept in their stock house.

“The area has been cordoned off. We are going to devise means of ensuring Improvement in the stocking of these equipment next time.

In a statement signed by the Commissioner for Information, Muyiwa Olumilua , shortly after the incident , said: “an explosion was reported earlier this morning at the Explosives Ordnance Disposal (EOD) office in Ado Ekiti.

“An initial on-the-spot assessment confirms that there are no casualties and the area is secured with no further threats.

“Members of the public are advised to go about their normal duties”, the statement said.

Davido Reveals Why He Can’t Do Giveaways Like Other Celebrities

“I’m Pregnant for a Man in Jail, Nobody is Supporting Me” – Princess Shyngle…