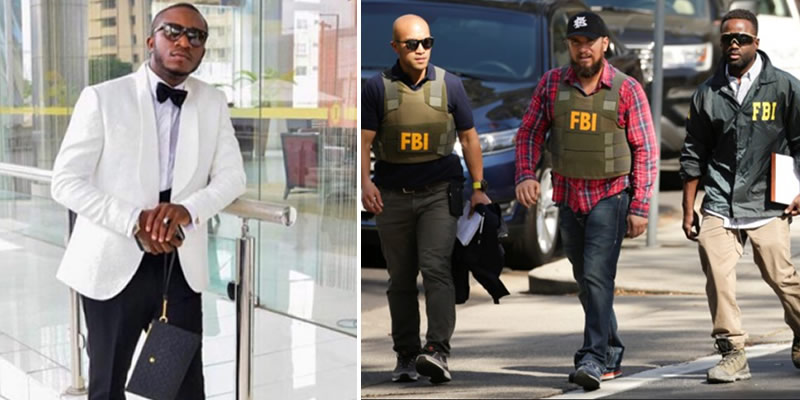 Obinwanne Okeke also known as  Invictus Obi who was arrested by the Federal Bureau of Investigation, FBI in 2019 on charges of fraud has accused the agency of accessing his mobile phones and laptops illegally after he was arrested and searched without proper procedure.

32-year-old Invictus Obi who was arrested in the United States in August 2019, he has now accused the FBI of illegally accessing his mobile phones and laptops which his lawyer said was enough ground for the charges against him to be dismissed.

In objection applications filed through his lawyers in December in a US court, invictus claims that his phones were seized by the F.B.I. agents that arrested him and searched without proper procedure.

The lawyers said when Mr Okeke was arrested at the airport while waiting to depart for Nigeria in August 2019, federal agents asked him to unlock his iPhone and Macbook Pro without first reading him his Miranda rights. The rights involve telling a suspect under arrest they have the right to remain silent and not cooperate with authorities, especially when the suspect has not contacted a lawyer.

His lawyers claim the Nigerian was not told he had a right not to provide passwords to his devices to F.B.I. or other American authorities, which made him assume he had no choice but to give them the codes.

Prosecutors however dismissed the allegations and insisted that Obinwanne Okeke was told he could remain silent, but he willingly agreed to let authorities search his devices by providing passwords to them.

The prosecutors also made the case that the evidence collected could not be dismissed on that ground, insisting that they only corroborated evidence already collected in the year-long investigation into his alleged involvement in the $11 million fraud.

The FBI prosecutors concluded by stating that it cannot be argued that Obinwanne did not know the implication of submitting his passwords for federal agents to collect information, as he is an educated adult with both undergraduate and graduate degrees, and has also traveled extensively across the world over the years.

The trial was billed to begin on February 18, however the new objections raised the the plaintiff’s lawyers meant that the court had no choice but to adjourn the trial.

#Coronavirus: We Are Suspending Services –…

Woman Shares Video of What Coronavirus Testing in…

In Like 2 to 3 Months, We Will Know Those That Saved Money – Davido Speaks of…